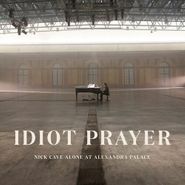 Idiot Prayer is the new concert film version of Nick Cave Alone at Alexandra Palace, the artist's recent online performance in London. Filmed by cinematographer Robbie Ryan (The Favourite, Marriage Story) the two-hour set of Cave performing solo on piano includes a wide range of his work, drawing from Tender Prey (1988), The Boatman's Call (1997), Push The Sky Away (2013), Ghosteen (2019) and more. Striking and somber in its delivery, the film is a solid reminder of Cave's no-frills talent, especially as it debuts two new songs, "Euthanasia" and "Idiot Prayer."