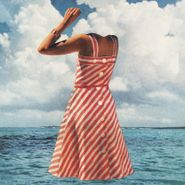 It’s a gutsy move to call your album Singles, but in the case of Future Islands, their fourth album and first for 4AD, it’s appropriate. The album is packed with songs that are both immaculately written and catchy as hell, as Future Islands mine new wave and pop-rock for all they’re worth. Just as lead singer Samuel Herring’s dynamite performance style and swingin’ dance moves have won people over (David Letterman, famously), the band gives it their all on songs like “Seasons (Waiting On You).” Herring’s emotional, throaty tenor, which can warp into a growl in an instant, is given the perfect backdrop of stargazing new-wave rock that should bring together fans of everyone from Bruce Springsteen to The Cure to The Killers with lighter-waving glee. The synths of “Spirit” bring up memories of B-Movies “Nowhere Girl,” but Herring’s unique voice keep Future Islands from ever veering into purely nostalgic territory. “A Song For Our Grandfathers” is dreamy yet packs an emotional punch. Herring seems to get more and more insistent over the sprightly “Light House,” almost completely out of step with the band, yet it works so much better than it would have if he played it straight, getting in your face and making it impossible to merely have the song on in the background. On “Like the Moon,” a sexy, pulsating groove gives Herring the chance to kill it vocally, crooning romantically. But his best vocal performance comes next, on “Fall From Grace”—over a simple waltz, Herring goes deep into the bowels of his voice to deliver a performance somewhere between Tom Waits, The National’s Matt Berniger and a black metal singer. Charisma like his doesn’t come around all the time, and as a band, Future Islands are smart enough to stay out of the way while crafting terrific songs that stand on their own. Before you know it, you’ve listened to Singles like five times and still can’t wait to hear it again.