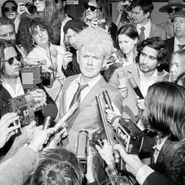 Australia’s POND continues to produce strong solo albums from its individual members. Multi-instrumentalist Shiny Joe Ryan has just released his second solo album, Shiny’s Democracy. (Since his solo debut was in 2014, the new title is a joking reference to Guns n’ Roses’ famously delayed Chinese Democracy.) Like his debut, Shiny’s Democracy is a set of polished psych-pop tunes, perhaps a little less rockin’ this time around. The singles “Ketamine” and “Pub Boat” are playful and summery, made for fans of classic indie-pop.