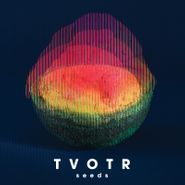 TV on the Radio continue their trajectory from Brooklyn noisemakers to arena headliners on their fine fifth album, Seeds. “Quartz” is a wide-open choral love song with some of Tunde Adebimpe’s most heartfelt vocals. The Beach Boys-inspired “Careful You” sails on slow-rolling waves of synthesizer. The propulsive “Happy Idiot” is the kind of brainy indie-rocker that only TVOTR can produce so well. You miss some of their early adventurousness; the hooks come easy here, as on the catchy “Right Now.” But it’s easier said than done to inject such widely appealing music with seamless experimentation—and vice versa. A sterling example is “Could You,” with a krautrock-inspired backbeat that sets the foundation for a densely layered track full of horns and golden harmonies. On Seeds, TVOTR feel energized and as vital as ever, perfecting the balance between producing music that is both viscerally enjoyable and intellectually stimulating.