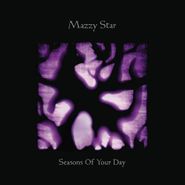 It's no surprise that Mazzy Star guitarist David Roback says the band was always recording throughout its long hiatus since 1996's Among My Swan. They still sound like the band that bummed out a million teenagers in the '90s on Seasons of Your Day. Opener "In the Kingdom" seems to underline the influence the band has had on acts like Beach House, Roback's warbling country guitar, gentle organ and Hope Sandoval's airy vocals taking ownership of that particular combination of sounds. Dark strummer "California" steers them into darker territory—Cali. ain't all sunshine and palm trees, Sandoval seems to remind us as she wistfully sings "it's so far, far away." "I've Gotta Stop" sounds like the Rolling Stones circa "Wild Horses" if they did even more heroin—no easy feat. That narcotic haze only occasionally gets lulling, though, as it has on some of their other releases. For the most part, Seasons of Your Day is more grabbing than anything the band has done to this point. Previously released songs "Common Burn" and "Lay Myself Down" are included here, sounding even better within the context of the album. They bookend one of Mazzy Star's best songs yet, the title track, capturing the mystery and subtle eroticism of Mazzy Star classics like "Into Dust" with just two fingerpicked acoustic guitar chords, some light strings and keys, and Sandoval's impossibly alluring voice, singing simple lines like "won't you let me come inside ... I know you've been missing me" that somehow evoke an entire relationship's worth of details. The band makes it easy to let them back inside with the stunning Seasons of Your Day.