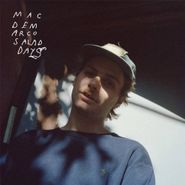 Mac DeMarco wrongly gets called “slacker rock.” At only 23 he’s releasing his third album, and it’s one of the best things we’ve heard all year. The title track is a swaying, gleefully glum blues track, its charming, singalong quality masking some quarterlife crisis (“Always feeling tired, smiling when required/write another year off and kindly resign,” suggesting some darkness behind DeMarco’s goofy grin). “Brother” features DeMarco sumptuously singing while milky guitars dance beneath the surface. It’s one of the loveliest tunes he’s ever produced. Songs like “Goodbye Weekend,” with its woozy, intoxicating guitar line and lovely jazz tones, speak to what a strong songwriter DeMarco has always been beneath it all. And while he’s all the better for ditching some of the affectations he sported on the still-great Rock and Roll Night Club in favor of a streamlined sound he’s dubbed “jizz jazz,” DeMarco can still pull some conceptually striking songs, like “Passing Out the Pieces,” which uses heavily effected harpsichord and booming synth-bass to create miraculous millennial psychedelia, pulling in some of the good ol’ Beatles/Kinks/Beach Boys influence he’s seemed to (probably smartly) avoid showing thus far in his career. Salad Days shows DeMarco to be a classical songwriter with the ability to turn an amiable, if not immediately memorable, voice and intricate yet mangled guitarwork into tunes that pull at you in unexpected, emotional ways. So he can’t be bothered to shower or cut his hair—we wouldn’t have it any other way.