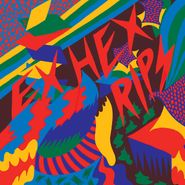 If there’s anyone who has earned their way into making an album like Rips, it’s Mary Timony. This is pure, pleasurable power-pop of the highest order, created by someone who’s spent most of their career making intricate indie rock in bands like Helium and Wild Flag. With Ex Hex, it sounds like Timony, who has a knack for finding unique melodies and guitar parts between the lines, just wants to have fun.  “Don’t Wanna Lose Your Love” soars on Timony’s desperate delivery and sassy riffs. “Beast’s” driving rock ‘n’ roll rides high on the beat of Laura Harris (of the Aquadolls). “Waste Your Time” is irresistible, with its yeah yeah yeahs and roller rink vibes, and “Hot and Cold” just sounds like an instant classic, calling to mind Joan Jett and the Pretenders without sounding overly reverential to them—Timony’s merely in the same class of songwriters. Sure, on one hand, Rips lacks originality, and that’s never really something you could have said about Timony’s work before. But on the other hand, this is the most instantly enjoyable music she’s ever put to tape, and it’s expertly done. So just plug in, play and let ‘er rip.