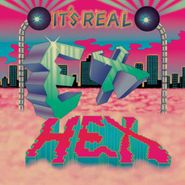 D.C. garage rockers Ex Hex lay down some killer riffs with their new, fun and gritty It's Real. With its arena rock worthy, regal riffage, "Rainbow Shiner" slinks around with major bite, as front-woman Mary Timony's vocals channel an early Joan Jett. The driving "Cosmic Cave," with its '60s girl-group-like chorus, sounds like a power-pop Shangri-Las, while album opener, "Tough Enough," is built on punchy power chords, and a cool, "looking for kicks" energy. Dig that harmonized guitar solo!