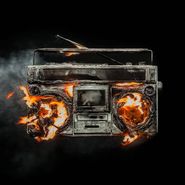 For nearly three decades, Green Day has been making music that has stayed relevant and forward looking by combining personal statements with direct political messages, angry rhetoric, and punk attitude; all while making addictive and always listenable rock. Created in reaction to their 2012 trio of releases - ¡Uno!, ¡Dos!, and ¡Tres! - Revolution Rock is a shorter, denser experience whose spirit is much closer to the anger of their multi-platinum album American Idiot. Grotesque dissatisfaction, angst, and political unrest is paired with some of their most melodious, catchiest tunes. From the opening riff of "Bang, Bang" the band's sick humor bubbles to the surface. Written from a bleakly ironic point of view, the narrator is a would be mass shooter expelling his desire for fame and celebrity through mass murder. Other artists would fumble a song with such serious subject matter, but Billie Joe Armstrong's nasally delivery combined with a warped sense of humor makes it a darkly comic pop-punk masterpiece. The self-titled track is a power drill right into your skull. With ferocious drums building and building, it explodes into a very symphonic song that reminds you of how they craft fun out of serious art, even as adults. Their sardonic outlook and pop melodies make them better than any rock band on the radio. Without a doubt, their best album in over ten years.