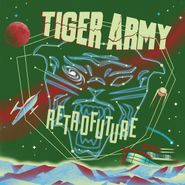 Tiger Army founder and frontman Nick 13 wrote the songs for new album Retrofuture with the idea of challenging the perception that people have of his band and its music. That’s because, more than 20 years after he started the band, he’s still on a journey of musical discovery and invention – one that’s perfectly captured by the title of their sixth full-length. It’s of the now and looking ahead as well. Yet while this album is another clear sonic evolution for the band – now completed by double-bassist Djordje Stijepovic and drummer Mike Fasano – it still brims with the band’s trademark dark romanticism and existential despair.