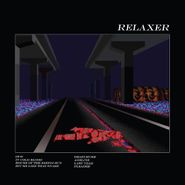 The eclectic, Mercury-prize winning indie pop group goes even further out there on Relaxer, a collection of eight songs that often sound like eight separate, unique iterations of the band jostling each other for playing time. There’s the alt-J of album opener “3WW,” a cinematic-minded piece that begins with a hypnotic, shuffling beat overlaid with a spattering of spaghetti western guitar before singer Joe Newman assumes the role of eden ahbez and muses on love and language over a constantly changing instrumental. In the ensuing sonic collage the band seems to use just about every timbre under the sun, yet carefully holds the whole thing together with a soft piano motif. Then there’s the alt-J turned freak folk group on “Adeline,” a moody whisper of a song that sustains its melancholy atmosphere until the eventual crescendo, in which a Hans Zimmer-worthy swell of strings and timpani meets eerie background chanting, an otherworldly treatment to the sort of climatic, big endings so favored by groups like the Lumineers. The band that most resembles the alt-J of their previous two albums can be found on “In Cold Blood,” which retains the herky-jerky rhythms and guitar and drum driven arrangements of An Awesome Wave while using a Capote reference to delve into a strange summer pool party gone astray. With echoes of '90s folktronica and post-Britpop in their blueprint, Alt-J have evolved from the unconventional indie pop of their early work into a group capable of creating whatever sound enters their head. Here’s eight of them.