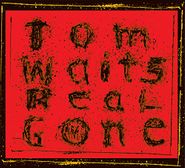 Tom Waits has had a storied career over the past five decades, encompassing many different sounds, textures, and moods, with the only constant throughout being firmly out of step with his contemporaries, sonically and otherwise. A very particular period of that career is now getting some love, as Waits is reissuing all of his albums released by ANTI- Records, which spans from 1999’s Mule Variations to his (as of now) last album, 2011’s Bad As Me. Sitting squarely in the middle of that period is 2004’s Real Gone, a true exercise in abstraction: a dusty, lo-fi production housing bluesy, almost ancient-sounding “pop” songs that clang and thud along with industrial menace. In revisiting the album, not only do Waits & co. remaster the original, but give it a whole new mix entirely. In doing so, a bit of the film is peeled off of the proceedings, leading to a clearer sound quality and increased sense of sonic depth. This more pristine production is closer to what Waits originally had envisioned for the record, so for those of you waiting patiently to hear the “real” Real Gone, your 13 year wait is over. Rejoice!