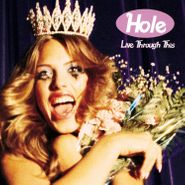 I still remember going to buy this album the week that it came out. It came out on April 12th 1994. Just a couple of days after Kurt Cobain died. I turned 20 a couple of weeks after that. It was an important year in my life for many reasons. Hole had already released Pretty On The Inside in 1991. But this was my first Hole album. It was just a crazy and sad set of circumstances surrounding this album. But the album still became a huge record that year. And everyone either hated or loved Courtney Love and Hole. I always try and imagine what the rest of the 90s would have been like with Kurt Cobain still around. But I was happy to have this album to console myself. The album featured "Violet," "Miss World," "Jennifer's Body," "Asking For It" & "Doll Parts." There is no denying how great this album really is. And it still holds up against any album released since then. I really got obsessed with this album and Courtney Love throughout the rest of the 90s. It is the kind of record that gets me a bit down and emotional. It is sort of like Courtney Love's version of emo. I can seriously listen to "Doll Parts" over and over again. This is another great record from 1994 that I will never forget. A record that will always be attached to my life in 1994.

This album featured in Brad’s Best Albums of 1994 blog.