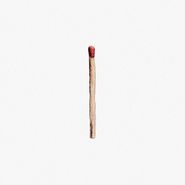 As possibly the most consistently successful German rock band of the new millennium, not only in Europe but with plenty crossover appeal in the States as well, Rammstein’s last studio album arrived all the way back in 2009, and the band had been on a recording hiatus for the past decade, preferring to perfect their renowned live act. With the release of their untitled seventh album, that hiatus is officially over. Appropriately, the album sounds like a decade’s worth of musical ideas suddenly unleashed at once, at times incorporating country-like twang, dramatic string orchestration, and Europop influences alongside the band’s industrial chug.