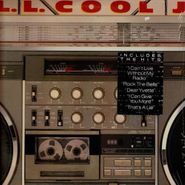 Beyond the fact that this LL Cool J album kicks some serious ass and, along with Run-D.M.C., personified the newer wave of mid '80s rap/hip-hop, what is even more amazing is the fact that the Queens, New York born rapper was only 17 when it was released. He was only 16 when the lead single off the album ("I Need A Beat") dropped in 1984. Of course, much of the credit for this album's sound goes to Rick Rubin for his instantly engaging, stripped-down, gritty and minimalist, yet powerful, booming-beat production style that acted as the perfect backdrop for LL's commanding non-stop flow of braggadocios b-boy rhymes - all of which were complimented by lots of scratching interspersed throughout courtesy of LL's DJ partner Cut Creator. In fact the single "Rock The Bells" was as much a Cut Creator track as an LL Cool J one and in the years since has become a staple of hip-hop/scratch DJs to use a tool for scratch freestyles and battle routines. The eleven track album Radio opens on a perfect note with "I Can't Live Without My Radio," a hit single that also appeared on the Krush Groove soundtrack. The artist born James Todd Smith, while known to many as an actor these days, still continues to record and release music, however the flawless Rubin-produced Radio still remains the greatest work of his music career.