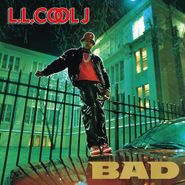 LL Cool J's second (and best selling) album Bigger and Deffer (BAD) captures a time in Hip Hop when the DJ was still given the recognition he deserved. In this case not only did Cut Creator cut it up throughout the 45 minute Hip Hop classic but additionally get his own album track. "Go Cut Creator Go" was also one of BAD's singles along with the scratch heavy, merciless in-your-face rap hit "I'm Bad," and the influential "I Need Love" that kick-started the "rap ballad" trend for the next few years in Hip Hop.