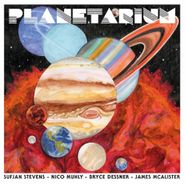 Sufjan Stevens, Nico Muhly, Bryce Dessner, and James McAlister have come together as an indie supergroup to record an album called Planetarium. Fittingly, the songs are about the planets and other things one might encounter in space, such as Halley’s Comet, black holes, and the Kuiper Belt and they’re all executed in a suitably cinematic, spacey manner. In spite of the band’s grand subject, however, there’s an intimacy, gentleness, and warmth to these songs, even when the unexpected vocoder sneaks in to give you that extra “you’re listening to a song about space” reminder. Planetarium is both very human and very cosmic; the songs are tender, lovely, and also a lot of fun.