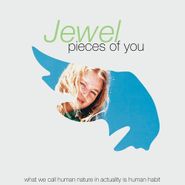 A new 25th anniversary edition of Pieces of You, the 12x platinum-selling album by Jewel, has arrived. The folk-pop singer/songwriter seemed to take the music world by storm with her vulnerable single "You Were Meant for Me," which introduces a powerful voice carrying a uniquely (for the time) simple acoustic style. The multiple formats of this anniversary issue include the remastered album plus various selections of rarities, outtakes, B-sides, and demos.