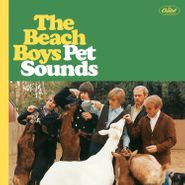 When Pet Sounds was released May 16, 1966 its reception was mixed. The 11th album for the already popular group garnered little critical and commercial success in the States, while in England it was hailed by the music press and hit the number 2 spot on the Top 40 charts. One Mr. Paul McCartney was so impressed with it the album became the main influence on his band's next record, a little thing called Sgt. Pepper's Lonely Hearts Club Band.

While it may be a little hard to imagine today, the radical arrangements, un-rock-like orchestrations, and wildly inventive production coupled with subject matter that was less cheery and more introspective than your average pop album of the day, was a lot to take in for some who were just looking for the next fun surf track to dance to down at the beach shack. However Pet Sounds paved the way for the idea that a rock album could be more than a mere collection of singles, but a cohesive piece of art. Brian Wilson's production on the album would open up creative possibilities we take for granted now, would influence all kinds of musical genres, and would bring the concept of production into the mainstream consciousness as an essential part of an album.

By now the initial poor reception of the album has been more than made up for and Pet Sounds is considered by many to be one of the best and most influential albums ever. Tracks like "God Only Knows," "Caroline, No," and "Wouldn't It Be Nice" are now hallowed classics, while songs like "You Still Believe In Me", "I Know There's an Answer," and "Here Today" particularly exhibit its creative influence on the production process.