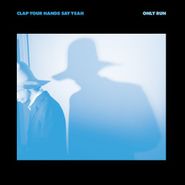 Clap Your Hands Say Yeah were in need of a makeover. After their stellar debut, which basically defined great indie pop of the mid-2000s, and an unfairly maligned, experimental follow-up, they drifted into solo and side projects, returning with 2011’s so-so Hysterical. That album seemed to have its eyes on the festival circuit, and while Only Run retains Hysterical’s fuller production, there are no overt rock moves here, nor the cuteness of their early work. Instead, Only Run layers on moody synthesizers, and Alec Ounsworth reins in his voice which, strange and wonderful as it is, sounds great here in its judiciousness. “As Always” is a shimmering bit of celestial dream pop. “Blameless” takes its cues from The Cure and Kraftwerk, feeling cold and mechanical but still emotional, given Ounsworth’s searching croon. The National’s Matt Beringer shows up to lend his baritone to the heavy, clanking “Coming Down.” “Little Moments” goes all out with the Tandy computer era mathematical synths, but it shows why this sudden retro-electronic turn works for Clap Your Hands—it serves as a welcome counterbalance to Ounsworth, whose voice tears and cracks as a consistent human reminder while the band builds the song to epic proportions. CYHSY could’ve probably returned to the sweet indie-pop of their debut and had fans smile back in kind, but Only Run shows they’re still an unpredictable force to be reckoned with.