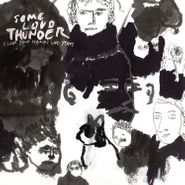 It's weird to think 2007 was ten years ago. It feels like recent memory, because the last decade seems to have flown by in a blur. Celebrating its 10th anniversary this year, Clap Your Hands Say Yeah's second album, Some Loud Thunder, pinpoints where music was at the time, and might sound relatively quaint today. Yet Some Loud Thunder has the right amount of spaciness and freeform freakouts to make it age well in the digital age, with personal lyrics and a sense of spiritual disassociation that is relatable in these unsettling times. It was released during the brief crest where indie rock started to slowly steep into the mainstream through commercials, word-of-mouth and internet buzz in the pre-streaming era. It captures that infatuation rock bands had with The Velvet Underground in the mid-2000s, without relying on it as a crutch the way some other bands did. It uses that influence to make songs that broke the mold and defied expectations in that scene, rattling cages just a bit. The album is abrasive enough to dip into avant-garde territory, but planted firmly in the world of rock n' roll by its rhythm and attitude. Sometimes when you revisit albums from your youth, there can be a degree of embarrassment, but the first two Clap Yours Hands Say Yeah albums (especially this one) have aged so wonderfully. This is the kind of music we can use more of in our lives.