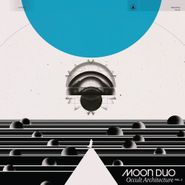 Psychedelic lifers Moon Duo have been traversing the genre’s hallowed ground for some time now, with their combination of Riley-inspired drones played through Spacemen 3’s amps over Krautrock rhythms, but 2017 finds them at their most adventurous yet. Conceived as a two-part opus around the Chinese concept of Yin and Yang, or darkness and light, Vol. 2 is the second part of the saga; the “light” side if you will. While Vol.1 pulsed with an undercurrent of amphetamine menace, this record is equivalent to a DMT-induced dalliance in heaven. Bright, angelic organs and fuzzed out guitars vibrate together in perpetual motion, accompanied by the blissed out vocals of Johnson and Yamada; often sung in unison and achieving a sort of mantra-like effect. The church of Moon Duo is well worth visiting, let your ego loosen a bit and come down softly sometime.