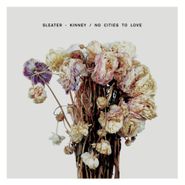 It’s tough to come back after a nearly decade-long hiatus, especially after your band’s best album (the combustible The Woods). But Sleater-Kinney succeed with aplomb on No Cities to Love, which scales back on Woods’ volume without dialing down the ferocity. Cities roars right out of the gate on “Price Tag,” as Corin Tucker gives a scathing indictment of American greed over Carrie Brownstein’s tuff gnarled riffs. Janet Weiss also gives a typically dynamic performance, switching between off-kilter punk-funk and straightforward rawk on “Fangless” and giving “No Anthems” and “Gimme Love” their pounding swagger. There’s a sense that Tucker, Brownstein and Weiss are growing comfortable with one another again, and appropriately, No Cities to Love is curt at 10 songs (thankfully trimmed of any fat whatsoever, really). When the trio fits together perfectly, as on “Surface Envy,” it’s a marvel to behold, its acidic riffs swaying and bursting at the seams while Tucker gives her band a worthy rallying call (“We win, we lose, only together do we make the rules”). Decidedly, No Cities to Love is yet another win for the returning rock titans known as Sleater-Kinney.