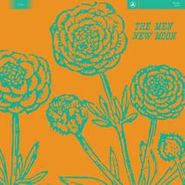 The Men go Wilco on New Moon, an album that largely breaks with the bracing post-hardcore sound of last year’s Open Your Heart and its predecessor, Leave Home. For listeners expecting the sound of those records, the jangly acoustic guitar and piano that open the album on “Open the Door” are a bit jarring, as are singer Mark Perro’s vocals, which sound road-weary rather than fresh-faced as before. The change makes more sense on songs like “Half Angel Half Light,” a power-folk barnburner that retains the energy of their previous work which showcasing the band’s apparent desire to create songs with more of an emotional impact. You could hardly call New Moon a folk record, though. “I Saw Her Face” begins as a two-chord, Crazy Horse-style psych rocker, sounding fine and grimey until the band says “f*ck it” and breaks into a full tilt gallop for the song’s thrilling final portion. From here on out, after the instrumental “High and Lonesome,” which sounds like Galaxie 500 on a country kick, the album grows stronger, as The Men are decent songwriters, but they’re a spectacular rock band. “The Brass” is pure Stooges-style fury; and “Electric” throws care to the wind and deals out good ol’ indie rock of the highest caliber, with thrilling breaks and ascendent riffs. It’s on these songs that New Moon truly shines.