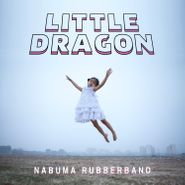 For their fourth full-length album, Swedish pop band Little Dragon wanted to do something a little bit different, pushing themselves to write and record in new ways. That’s immediately apparent as Nabuma Rubberband begins with the unsettling chords and buzzing effects of “Mirror,” which sounds like the soundtrack to a paranormal thriller as Yukimi Nagano sings eerily “you’re gonna make me put my fist through this mirror.” It’s a bold move, one seemingly intended to throw off those who would classify Little Dragon as some sort of loungey pop act. A sense of decay and foreboding underpins Nabuma Rubberband, but it mostly works in their favor, acting to add a level of ghostly allure, rather than to really bum anyone out. That’s in part because Nabuma Rubberband is an incredibly dynamic album, blowing up with wild, overblown house synths on “Klapp Klapp” and flowing back into sumptuousness and danceable beats on “Paris” just as the album is in danger of going too deep into post-rock, Talk Talk-inspired territory. Between those singles, there are a lot of in-between moods Little Dragon are interested in exploring, like the pillow talk feel of the sensual “Pretty Girls,” the acid-house base of “Underbart” and sci-fi textures of “Pink Cloud.” “Let go of everything I know,” Nagano sings on the album’s closer. Not quite—there’s still so much of the lusciousness for which they’re known on Nabuma Rubberband—but by going beyond this, they’ve created they’re most mature and interesting album yet.