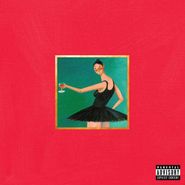 Kanye's personality is so large and distracting, you sometimes forget that he has it in him to make an album grandiose (and grand) enough to match it. On his fifth and latest, Kanye establishes that without a doubt, and nails it to the floor so you'll never forget it. This is a big album, with a big sonic spectrum, endless layers of sub-bass and chunky drums and feathery flourishes and sky-high melodies. And it's full of big ideas -- Kanye is one egomaniacal, torturously self-exploring dude, and it all comes out here in widescreen. And it travels far beyond hip-hop, into psych-rock and afrobeat and choral harmonies and what-have-you. And it's his best outing on the mic yet -- he's (mostly) quit singing (since the crappiness of 808s and Heartbreaks), and he sounds more relaxed, self-assured, and natural than he's ever sounded, even when belting out insanely confrontational boasts and pouring out confessions lesser men would quail to whisper. One of those landmark albums that makes you forget anyone else is even in the game.