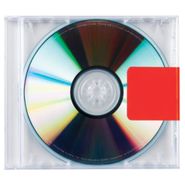 Kanye is mad, REAL MAD, and he wants to give you a laundry list of reasons why. Say what you will about his not-so-personal life, his temper tantrums, and his general egomaniacal leanings, but Kanye pushes musical boundaries. If My Beautiful Dark Twisted Fantasy was West's rock opera, Yeezus is the backstreet brawl that breaks out after the marquee goes dark. It's aggressive, abrasive and, at its peak, has enough jarring distortion and waves of unrelenting screams to soundtrack your nightmares. You've been warned, this one's not for the faint of heart.

Much as 808s & Heartbreak was a reaction to personal drama that led to a cold, mechanical album unlike anything he had previously produced, Yeezus seems to be a response to everything Kanye West has previously recorded — and to hip-hop, and popular music, in general. In short, it sounds like nothing else around, a fusion of harsh industrial production and some of West’s most aggressive lyrics to date. We had already heard the controversy-baiting “Black Skinhead,” its Nine Inch Nails-style beat giving a tribal flow to an otherwise entirely antagonistic first single. The rest of Yeezus follows suit; West and his collaborators keep you guessing what’ll happen next throughout. Listening to opener “On Sight” feels like staring into a glaring light, its synths overdriven to a digital roar, as West claims he doesn’t give a fuck, before West and producers Daft Punk drop an R&B sample that sounds like it was recorded from another room. “New Slaves” takes bling-obsessed hip-hop to task, along with private prisons and implied white privilge, ending with a gorgeous, lo-fi outro sung by Frank Ocean — it’s way too much for one song to handle, yet it’s thrilling to hear the song teeter back and forth. Even the tracks here that don’t sound particularly interesting at their outset, like the slow-to-start “Hold My Liquor,” eventually do something that make your head spin — in the case of this song, it’s the way those sirens and West’s cadence bounce off the bubbling, ethereal synthesizers beneath.

The greatest faults in Yeezus lie in West’s lyrics — heightened braggadocio and claims of manhood are nothing new to hip-hop, which is exactly the problem with some of the more repetitive lyrics about his sexual conquests, compared with their riveting delivery and the production surrounding them; furthermore, “Blood on the Leaves” questionably cops anti-racism classic “Strange Fruit” for a track that doesn’t amount to much lyrically. Yet even beyond these issues, Yeezus is so thoroughly exciting that complaints largely fall by the wayside — in fact, West’s free-for-all attitude to making music here is what fuels that burning feeling in the pit of your stomach when Yeezus is on. Even as the spectacular My Beautiful Dark Twisted Fantasy stretched the limits of modern hip-hop, Yeezus doesn’t sound tethered to any particular time or genre, nor does it sound particularly concerned with radio airplay — even the Rick Rubin-produced “I Am a God,” one of the closest tracks here to straight-up hip-hop, seethes frustration and anger, dissolving into a series of screams and Twin Peaks-style synth strings, with nary a catchy sample or synth riff to rope in the average listener. For someone who receives (and invites) endless flack for things that have little to do with his actual music, Kanye West continues to be the most provocative and exciting artist in modern pop music with the imperfect yet undeniably brilliant Yeezus.