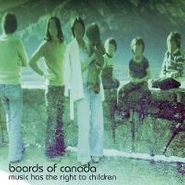 In 2004, in between the group's Geogaddi and The Campfire Headphase, and as IDM reached its global-awareness apex (potentially jumping the shark with the massive crossover success of the [distinctly American] Postal Service's saccharine-glitch masterpiece Give Up) Warp reissued MHTRTC for the first time, tacking on the previously American-only bonus track "Happy Cycling" and repackaging the thing as a friendly reminder to the Pitchfork generation geeking out on mid-career Matmos, Autechre & Schneider TM that this music had roots. Originally issued in 1998, MHTRTC's title is fitting - it has given birth to many children, and it seems that its grandchildren want another reissue. With the massive success of the Boards' most recent comeback outing, Tomorrow's Harvest, timed for release at a time when thoughtful, intelligent, electronic music is as in vogue as it has ever been (but please don't say IDM), this latest reissue is yet another gentle reminder from Warp and the boys that they invented this shit. According to the Boards' website, these vinyl reissues are "responding to popular demand" and mark the first time this work has been repressed in over five years. Also they come with stickers. Context aside, this is an incredible album that, with the exception of some chillaxed turntablism, sounds totally contemporary, a.k.a. timeless. Do yourself a favor and pick this one up before it goes out of print again.