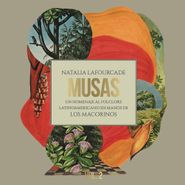 After the massive success of Natalia Lafourcade's Hasta La Raíz and its crossover appeal to non-Spanish speaking audiences, she's deliberately been making musical choices to further explore Latin music and the diversity of Latin America. With all the countries that make up the rich cultures of Latin America, there's distinct lines drawn between Mexico and Guatemala, or Chile and Argentina, et cetera. But Natalia Lafourcade is looking to at least eliminate those barriers with Latin music and unite the countries into one rhythm and one sound. Musas Vol. 2, the sequel to last year's Musas Vol. 1, continues the roots of folklorico and keeping it relevent in the 21st century. This doesn't mean drum-machine, synthed-out versions of standards, but instead means quiet, new meditations on classic songs that keep the spirit of the original songs warm and toasty. It shows off Lafourcade's range as not just a pop singer, but a truly dynamic balladeer who sings without a false note or an iota of affectation. Her voice just feels completely natural and channels those old records from long-gone trios, tango singers, and guitarristas. "Danza de Gardenias" has a production that even feels nostalgic where nothing sounds too polished and clean and is closer tied to the old comps of world music done by Folkways from the fifties. Featuring some beautiful guitar work against some short clarinet riffs and stand-up bass, Lafourcade sings with such soul that captures the flavor perfectly without any modern pop missteps. It's spartan and simple, but is all the better by how she downplays her performance. "Alma Mía" is so bare and honest, that it channels the sound of old Luis Bonfa records with a bossa nova melody that can break your heart. It's difficult to not get emotional hearing her sing this romantic ballad so softly and with such finesse that reveals so much real feeling. It's wonderful to hear artists like Natalia Lafourcade make real leaps and bounds with their sound. Musas Vol. 2 is proof that you can accomplish so much by whittling away at musical decadence and getting to the root of good music.