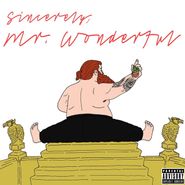 Mr. Wonderful is the first major label release from the Queens, NY based rapper Action Bronson. The former gourmet chef turned rapper has been developing his chops over the last eight or so years, consistently gaining significant critical acclaim in the underground rap scene. After spinning that acclaim into several knock out collaborations (notably Statik Selektah, Well-Done and The Alchemist, Rare Chandeliers) it was only a matter of time til’ the rest came calling for Bam Bam. Mr. Wonderful, featuring production credits from the likes of Mark Ronson and guest spots from Chance the Rapper (both featured on “Baby Blue”) is a self-proclaimed “Life’s Work.” Which means Bronsolini ain’t pulling any punches! Leading off with the Billy Joel sample on “Brand New Car,” Bronson's energy is witty and profound, and leaves you hungry. A big step for Action Bronson, Mr. Wonderful is only the beginning for this Zagat rated rap star.