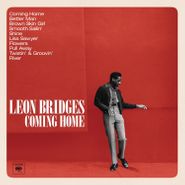 The Leon Bridges record Coming Home has really grown on me. Check him out. His breathy phrasing that mimics a saxophone solo is addictive. “Lisa Sawyer” and “Flowers” keep echoing in my head.

From the first notes of his sweet, soulful viral hit, “Coming Home,” you can tell you’re listening to the emergence of a huge new talent. Leon Bridges calls to mind a young Sam Cooke with his heartfelt R&B, produced with analog grit for a timeless sound that feels like a huge breath of fresh air in these days of maximally produced radio pop. You can really here the warmth to Bridges’ voice on the waltzing “Brown Skin Girl,” letting his vocals pour over the guitars and saxes like syrup. But Bridges’ guitars and style are also raw enough for the garage kids, kicking up plenty of dust on tracks like “Flowers” while showing enough restraint to keep things classy. He doesn’t stray much from the template set by his influences, but he doesn’t need to when the resulting music feels so vital. Perhaps more than any other contemporary artist, Bridges makes what was old sound new again on his remarkable debut.