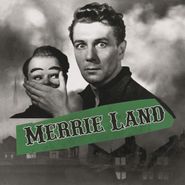 Using Britain's referendum on exiting from the European Union as the reformative spark, supergroup The Good, The Bad & The Queen have returned over a decade later with their second release, Merrie Land. Damon Albarn, Clash bassist Paul Simonon, Verve guitarist Simon Tong, and Afrobeat drummer Tony Allen are back to muse on the state of being British in 2018, this time with legendary Tony Visconti in the producer's chair. Fans of Albarn's particular brand of electro-melancholia will find more to enjoy here.