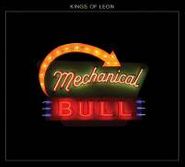 The scruffy brothers of Kings of Leon are back with more odes to booze 'n' girls on Mechanical Bull. Even with its honky-tonk title, the band continues to indulge both its Southern roots and post-punk leanings. On "Supersoaker," Caleb Followhill's howl is as gruff as ever, calling out to sentimental girls while his band drums up a Strokesy din. "Rock City" comes on like a countrified "Purple Rain," pairing its bar band guitars with gender-bending lyrics—it's a hoot to hear Followhill sing "I can shake it like a woman" over such macho riffs. Mechanical Bull has its requisite power ballads like "The War," which is touching and romantic, and "Wait for Me," which balances an AOR chorus with new-wave guitars for a unique combination. But it's also as rocking as the band has ever been, like the awesome country-punk of "Don't Matter" and "Work on Me," which hurtles forward smoothly just as things get a little soggy. Few bands can challenge Kings of Leon in terms of being able to straddle the line between their underground influences and radio-ready ambition. Mechanical Bull helps establish them as unmitigated pros. Giddyap.