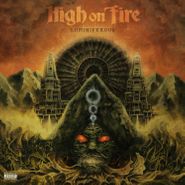 High on Fire rain down metal riffs like burning embers on their seventh album. Producer Kurt Ballou of Converge helps billow High on Fire’s sound until it’s white-hot—the band has simply never sounded better. And it doesn’t hurt that frontman Matt Pike (who also plays with reunited stoner-rock gods Sleep) has delivered some of his best songs. Opener “The Black Plot” rips a hole in the atmosphere with its voluminous guitars and punishing double bass-drum, momentarily quieting down and roaring back to life for a huge finish. Pike growls mightily over the hammering “Carcosa,” which evolved from a charge to a slow descent that offers Pike the chance to deliver a molten solo and then back for a galloping ending. From “The Sunless Years’” harmonic sludge to “Slave the Hive’s” pummeling force through the title track’s speed-metal fury, Luminiferous is an unrelenting ride through classic metal that should leave fans with huge smiles. Unleash Luminiferous on your ears and let go.