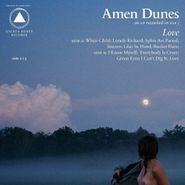 Damon McMahon’s third record as Amen Dunes is a stunning leap forward. McMahon recorded sporadically over the past decade or so while living in China and the States, releasing solo, acoustic material and songs recorded in a low-fi shroud on albums like DIA and Through Donkey Jaw. McMahon seems more self-possessed than ever before and his sound fully formed on Love, a collection of warm, softly psychedelic folk-rock. Songs like “Lonely Richard” have the kind of direct, heartrending melodies that people spend their lifetimes trying to find. McMahon’s voice echoes and cracks with experience, adding intrigue to songs like “Sixteen.” The attention to detail here is striking, on the clattering, off-time strums of “While Child” that carefully threaten to derail an open-hearted folk song, or the polyrhythms on “Splits Are Parted” and soft, atmospheric touches on “Love.” And the band McMahon has culled together knows how to support him perfectly, offering mellow rhythmic drone and spacey guitar effects that help make “Everbody Is Crazy” spellbinding. Though Love comes off as effortless, it’s clearly been a trip to get this far—“It takes a lot, babe, I know myself” McMahon sings like James Taylor’s too-cool son on the gorgeous “I Know Myself.” Seems like McMahon has made the album he was always supposed to make with Love.