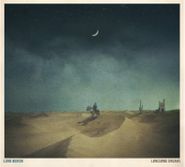 On Lonesome Dreams, Lord Huron’s Ben Schneider creates a soundtrack for travel. Opener “Ends of the Earth” finds him telling his lover “There’s an island where everything is silent/I’m gonna whistle a tune,” among other evocative lines about getting the hell out of dodge. From there his Americana-fueled journey touches on hints of the exotic — the clanging percussion of “Time to Run” calling to mind the East while he sings concurrently about finding a life way out West. Along the way he discovers the loneliness of wide-open space on the spare title track; harmonicas haunt him on “The Ghost on the Shore,” hinting at nostalgia born from hitting the edge of the land and looking back. The whole thing gallops along with country jangle, nightsky atmosphere and Schneider’s throaty, impassioned vocals, and it’s nearly impossible not to get swept in its romanticism.