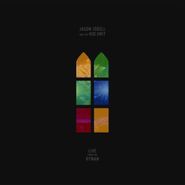 Most bands go on tour to promote their new albums. Then there are those whose albums almost function as a promotion for the majesty of their live act. When you have a backing band as talented as Jason Isbell’s, the latter approach makes sense. The 400 Unit have been the musical bedrock behind ex-Drive-By Trucker Jason Isbell for about a decade, and while their chops are surely evident on Isbell’s studio albums, they absolutely get their moment to shine on Live from the Ryman, a collection of 13 songs culled from the group’s six nights at Nashville’s Ryman Auditorium last October. Particularly epic is the rendition of “Last of My Kind” from 2017’s The Nashville Sound, as what is a relatively straightforward acoustic ballad is transformed into a sprawling, country-rock anthem with a huge, gospel-tinged aura, no doubt aided in part from the audience audibly singing along. While listening to the 400 Unit rip it up on your headphones is no substitute for being there, Live from the Ryman will get you pretty darn close.