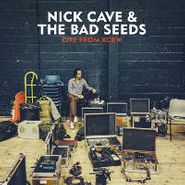 Nick Cave’s recorded output has been so consistent that in no point in his career would it seem indulgent to release a live album. It just so happens that his latest album, with The Bad Seeds, is particularly strong, so we’re thankful to have much of it recorded in a live setting, as part of KCRW’s typically excellent live recordings. Starting with Push the Sky Away’s long, languid, Miley-Cyrus-and-Robert-Johnson-reffing “Hoggs Boson Blues,” Cave and co. play most of the album to an appreciative audience. Cave’s unadorned voice sounds glorious as he sings “you were my main little lover in a world where everybody fucks everbody else over” in the hopeless “Far From Me.” Cave’s classics sound great here as well, as the band takes on “Stranger Than Kindness,” “The Mercy Seat” and especially a rollicking “Jack the Ripper.” While Live at KCRW can’t quite compare with seeing one of the band’s exhilarating live shows, it’s damn near close and another welcome addition to the Nick Cave catalog.