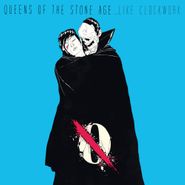 Josh Homme and many of the usual Queens suspects have finally gone back into the studio with an eclectic mix of cameos (including Dave Grohl and Elton John) to give us a thick and heavy album of dark pop.

The latest album from Queens of the Stone Age has longtime fans excited for a number of reasons: it’s their first album in six years; it features high-profile guest appearances (Elton John, Trent Reznor); and it’s the first time since their classic Songs for the Deaf that Dave Grohl’s back on drums for the majority of the album, with former bassist Nick Oliveri singing backup on a couple of tracks. Of course none of that would matter if the songs weren’t as good as they are. Like Clockwork finds Homme and co. in gothic mode, wrapping dark riffs around moody arrangements. "Keep Your Eyes Peeled" struts slowly like an old engine starting, firing off in quick bursts of robot riffery. "The Vampyre of Time and Memory" sees the band engaging in Queen-style rock cabaret, with Homme likely reflecting on months of medical struggles with typically dark humor ("I survive, I speak I breathe, I’m alive, hurray"). Grohl’s metallic disco beat sends "If I Had a Tail" sailing smoothly through its troubled waters. The band brings back the desert-rock magic for "My God is the Sun" and "I Appear Missing," which will have fans kneeling before them once again after years of quietude from the band. And "Fairweather Friends" is a must-hear, with Homme unleashing some of his finest singing and guitarwork to date as Elton John billows the whole thing with his ever-commanding voice. By fearlessly taking on new territory while throwing fans a few bones, Like Clockwork ends up a welcome return. All hail the Queens!