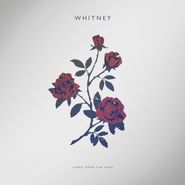 Smith Westerns might not exist anymore, but Whitney is continuing what they started. Max Kakacek and James Ehrlich, both formerly of Smith Westerns, channel The Band at their drunkest and most stoned for a fun album that sounds like the '70s never ended. Coming from the break-up of their previous band, they used what could've been a moment of tragedy to renew their creative energy. The days of beautiful/sad albums by the likes of Jackson Browne, Harry Nilsson, and James Taylor have been long gone, but Whitney brings back that joyful feeling with songs that feel so earnest and simple that it's like hearing them in person. "No Woman" is a meticulously crafted song about emptiness that's perfectly accompanied by a gentle Gordon Lightfoot-ish guitar part and punctuated by horns that have the right amount of impact before disappearing. "Golden Days" is the opposite. Though the lyrics are about nostalgic aches for the past, the track is surprising and energetic, filled with optimism. As lonely as you get, there's the warmth of knowing that these memories still exist in some form. "No Matter Where We Go" is probably the happiest track on the album and duplicates the anything-goes attitude of mid-'60s Dylan where things are a little messy, but all the ardor of making rock is there. You listen to it and you know that band is having fun making a song as relaxed and natural as this. 2016 has been filled with plenty of great debut albums, but Whitney's Light Upon The Lake has more finesse with a delicate, airy feeling that is fully formed and mature. Rich arrangements, unique voices, and brilliant lyrics make this the chill jam album of the year. Perfect for late-night drinking or quiet summer moments.