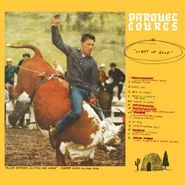 Parquet Courts make rushing indie rock with snarky lyrics that wipes the floor with most of its ilk. Drawing on the warped psyche of Jonathan Richman and The Modern Lovers, as well as the sludgy guitar antics of Sonic Youth, Guided By Voices and Pavement, Parquet Courts still manage to conjure up their own identity, aided in a great part by the charisma of its frontmen, Austin Brown and Andrew Savage. Its first couple of songs blur into one another in a frantic rush, but they break up the proceedings with short, snappy songs about stoner food and the DMV and whatever else, built on taut little grooves. Yeah, they sound a bit like Charlie and Ray’s band from “Girls,” but it’s rarely this addictive to hear about misguided youth.