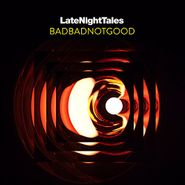 Those four Canadians who deftly blend jazz, hip-hop, electronic, and lounge into their bitches brew of sound curate a playlist for Late Night Tales. The long-running series features different bands and artists compiling their own definitive late night mixtape, and BadBadNotGood’s collection highlights a range of groups that have inspired and helped shape their unique, soulful style. The degrees of separation from BBNG to each artist are kept purposefully small, as in their own words, “Every track on this comp was either shown to us by an incredible person or made by one of our friends…These artists, as well as many, many others, have influenced us to create, and kept our deep love of music alive.” What that translates to is a compilation of songs that very much conjure the same atmosphere that a BadBadNotGood studio album would; they themselves the perfect band for evoking late nights and twilight moods. Also features the group doing a hypnotic cover of “To You” by Andy Shauf as well as a spoken word piece by Lydia Lunch.