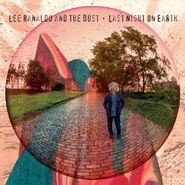 In Sonic Youth, Lee Ranaldo wrote some of the band’s most daring compositions, noise-laden beat poems that would often eschew traditional lyricism, song length or use of sound. On his 10th solo album, Ranaldo lends his exploratory heart to some of the most melodically enjoyable songs of his career. “Lecce, Leaving” drums up some melodic country jangle, interspersing it with psychedelic noise breaks. “Key/Hole” features stunningly beautiful guitarwork—no surprise there—but Ranaldo has never allowed himself to sound so vulnerable, calling to mind a mythical collaboration with The Replacements. Other times he’s channeling Neil Young (the lovely “Home Chds”) or indulging in some good ol’ fashioned Lee jams (“The Rising Tide” should please many a Sonic Youth fan). Though he’s often thought of having been the George Harrison of Sonic Youth—the quiet one—like George, Lee often would pull off the band’s most devastating moments. And now that SY is no more, his solo career seems poised to be the main event. Last Night on Earth is a fantastic start to a new era from one of the best guitarists alive.