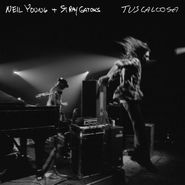 The newest release in Neil Young's Archives series is a live recording of his February 1973 concert at the University of Alabama with his band The Stray Gators: Tim Drummond, Jack Nitzsche, Ben Keith and Kenny Buttrey (replaced by Johnny Barbata shortly after). Previously unreleased - Time Fades Away was the live album issued that year instead - Tuscaloosa reveals Young and the band in full stride and with a laidback but urgent sound. The set includes some uncharacteristic stage banter in the way of a few song introductions from Young, and the live sound is excellent.