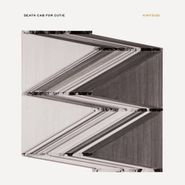 The worst thing you could say about a band might be that its music is “pleasant.” This has dogged Death Cab for Cutie to some degree; on one hand, Ben Gibbard’s songwriting as rarely faltered, nor has Chris Walla’s production. But perhaps to battle the perception that their music is merely “nice,” the band has grown increasingly dynamic in its approach, and Gibbard’s lyrics deeper in their darkness (Narrow Stairs’ “I Will Possess Your Heart” comes to mind). On Kintsugi, they continue this trend. With Walla now no longer with the band, it’s their most different-sounding album. “No Room in Frame” and “El Dorado” come in with a surprising syncopated drum beats that make the songs soar. “Everything’s a Ceiling’s” synths and emotional outpour sound like a new take on ’80s prom classics like “Forever Young,” and “Good Help (Is So Hard to Find)” pulses on a new-wave groove. “Black Sun” perhaps draws from Gibbard’s split from ex-wife Zooey Deschanel on some of his bleakest lyrics (“How could something so fair be so cruel/When this black sun revolved around you”). The more upbeat “The Ghosts of Beverly Drive” masks sad nostalgia in its sunny backbeat—“I don’t know why I return to the scene of these crimes,” Gibbard sings remorsefully after describing lovers who are seemingly just starting out. Some of Kintsugi’s ballads get sappy, but there’s no denying how lovely and affectingly sad Gibbard sounds on the solo acoustic “Hold No Guns.” However easy it may be to enjoy Death Cab For Cutie, their music also overflows both with ideas and emotion on Kintsugi.