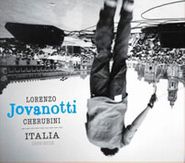 The first U.S. release from Italian superstar Jovanotti. Rather than a greatest hits collection, Grammy award winning producer Ian Brennan has compiled and remixed what he considers Jovanotti’s most compelling material over the past 25 years. The album also includes four altogether-new tracks: “New York for Life” and “Con La Luce Negli Occhi,” and radical re-workings of “La Porta E Aperta” and “Mezzogiorno.”