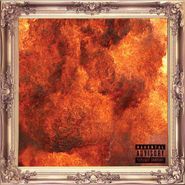 For Kid Cudi’s third album, he drops the “Man on the Moon” motif of his previous albums for a bigger sound and broader concept. After releasing music under his rock crossover project, WZRD, Indicud returns Cudi to his hip-hop roots, with Cudi declaring it to be his Chronic — hence the album title. He eschews that album’s thug life imagery and hard-hitting beats for agreeable hip-hop flavored by indie rock and recent cloud rap. Just as cannibus indica produces a heady, relaxed high (or so I’ve heard), Indicud occasionally is too lethargic for its own good, however listenable it is. But its singles are fine entries into the stoner rap canon, with “Just What I Am’s” surging, minor-key synths suggesting a sort of relaxed melancholia, while Cudi’s rhymes touch on religion (and of course, weed) for a kind of laid-back reflection that doesn’t take itself too seriously. “Immortal’s” four-chord, backward acoustic guitar sample sets the stage for Cudi to sing (not very well, but earnestly) about re-finding his mojo. “Girls” sees him teaming with Too $hort for a much-needed escapist club song, though it’ll have to rely on remixes for a better beat. Indicud is actually at its best when it gets weirder and doesn’t try too hard to crowd-please — “Unfuckwittable” wins the stoneriest track award, with its synth line bending and breaking and sounding like a warped record played on slow speed, but its chorus is actually pretty catchy and it ends up one of the album’s most memorable tracks. Mostly Indicud works as a set of breezy tunes to lounge by the pool with, or to stay indoors and get “sleepy” to.