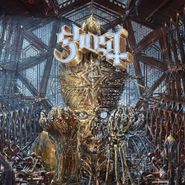 Ghost delivers another solid scorcher of an album in the form of IMPERA. This time the band’s turning their considerable/formidable talents toward an ‘80s-influenced metal style, with fierce riffs and anthemic melodies. Few bands could go this hard, bringing such menace and majesty to both ballads and bangers alike—but Ghost, of course, pulls it off with aplomb. If you’ve ever dreamt of an arena rock album about the collapse of empires fronted by a menacing pope figure, this one’s for you.