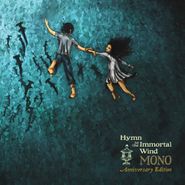 MONO could easily stake a claim as the most dramatic post-rock band of all time, no small feat in a world full of black emperors and bombastic crescendos. The Japanese quartet has been going strong for a full two decades now, and Hymn to the Immortal Wind, originally released in 2009 and coinciding with the band’s then ten year anniversary, now represents the exact halfway mark in their storied career. In a way, there could not be a more fitting album to do so, as Hymn might be the best encapsulation of MONO’s sound so far, and an album that certainly achieves the band’s goal of eliciting emotion on a grand scale. While their music and color schemes have grown darker in recent years, Hymn represents a perfect balance: between light and dark, heavy and soft; alternating pummeling force with tender grace, achieving an effect that is at once both portentous and sublime. How’s that for drama? Newly remastered from the original analog tapes, Hymn has been reissued on CD for its tenth anniversary.