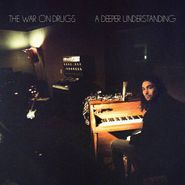 Once again, The War On Drugs update their hypnotic take on AOR-minded heartland rock. A Deeper Understanding marks the band’s jump to a major label and, boy, does it sound the part. While previous albums have had a sort of stripped down production awash with reverb, Deeper does the band’s influences justice with a sound that is punchy and immediate, filling all corners of your speakers. The names that are evoked here are huge: Bruce Springsteen, Tom Petty, Bob Dylan. Yet what The War On Drugs create is more akin to what the patrons of some grimy dive bar in Philly, which plays nothing but the aforementioned artists, might come up with rather than those artists themselves, especially if said winos also had the guitar prowess of Tom Verlaine and Richard Lloyd. Yes, there’s a bit of Television haunting the sprawling, passionate solos that dot these melancholy, ruminative songs, which often stretch well past the 6 minute mark. Neil Young is also an appropriate signpost, as a fellow progenitor of wild, unkempt guitar work over folky underpinnings. Yet if all the classic rock references lead you to believe this music equates to blatant retroism, you’d be mistaken. The War On Drugs sound like all these various artists without truly sounding like any one of them at all. These are the hazy recollections of American rock from the half-conscious; filtered through noisy guitar bursts and narcotic keyboards, and grounded by a gravelly tenor that conjures wistful visions of landlocked states. But this still isn’t anything near “beer commercial lead guitar” music, if you’re inclined to believe Mark Kozelek. For one, beer commercials ain’t 6 minutes long.